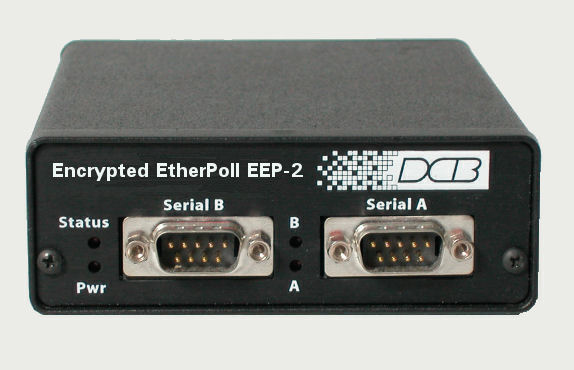 The EEP-2 Encrypted EtherPoll is a SCADA communications serial server that allows multi-drop devices to use Ethernet LANs. Using the EEP-2 AES-128 bit encryption, even the Internet can be used securely. The EEP-2 connects any async serial device through a LAN and between LANs via routers. The EEP-2 is designed specifically to support asynchronous polling protocols, such as Poll Select, Modbus, DNP3, IEC-60870-5-101, etc. The EEP-2 uses IP protocol, allowing the necessary data connection over a local LAN and across routed networks. The EEP-2 functions independently of the device protocol, allowing most 8 bit asynchronous protocols to be used with no configuration changes.

The EEP-2 Encrypted EtherPoll maps data from a serial port to as few as one IP address to as many as 32 remote IP addresses. This feature makes it easy to have redundant host sites that will always receive the same poll responses as the master host site. If you have the objective of installing a backup host site or have a second site that always monitors the RTU responses, the EEP-2 makes it easy.

The EEP-2 Encrypted EtherPoll supports RS232 serial interface speeds up to 230 Kbps. Since it uses the UDP/IP protocol, overhead is much lower than it would be if TCP/IP were used, as there is no “session setup” or “session breakdown” with each connection. Up to 32 remote EEP-2s may be used with each host EEP-2.

The EEP-2 Encrypted EtherPoll can be managed directly through the serial port as well as through the ethernet port. TCP/IP telnet or a web browser can be used.

Security features embedded in the EEP-2 Encrypted EtherPoll include fine-grained configuration and management controls, as well as the ability to turn off remote management functions.

Instead of replacing your existing serial RTUs and SCADA system with ethernet RTUs, add the EEP-2 Encrypted EtherPoll for a fraction of the cost. OEM manufacturers can design the EEP-2 into their products or use it as an add-on method to gain ethernet connectivity. DCB supplies the EEP-2 to many other companies and can provide custom firmware for specific applications.