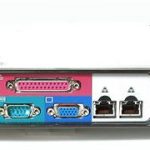 The ET-6630 encrypts data between private networks using the public Internet or any private Intranet network as the transport.

The ET series uses AES or ISAAC encryption. AES is the US Government standard, selected using an open selection process, to replace DES and 3DES encryption.

The ET series operates through firewalls with only one port of your choice opened. It bridges all ethernet protocols including IPX, IP, NetBEUI and other proprietary protocols.

The ET series is straight-forward, easy to configure and maintain. The ET series has state-of-the-art AES encryption security without the configuration complexity of VPN.

Due to the encryption employed in these products, the ET-6630 series products are export controlled items and are regulated by the Bureau of Industry and Security (BIS) of the U.S. Department of Commerce. Export regulations may delay delivery to some areas. The ET products will not be exported or shipped for re-export to Country Group E:1 as defined by the BIS. The lower performance ET products (ET-6600, ET-3300 ) are readily exported to most other countries using the “ENC” exemption. The ET-6630 requires an individual export license for each delivery outside the USA. Our companion products, the ET-6600 and ET-3300 are exportable under similar regulations as “mass market encryption devices”.